Where we left off

My last blog post was about my Urban Decay Giveaway.  You have until October 31st at 7 PM (Atlantic Standard Time) to enter.  This might help you if you’re like me when it comes to time zones.  I’ll do my best to get home before midnight to announce the winner.  If I can’t make it on time, I’ll let you guys know via Facebook.  If you’re interested in participating, click here for entry rules.

I recently went to an antique car show in San Juan and met up with some of my friends.  Getting there was a hassle, especially after working until 4 AM the night before.  It was worth it, because we were able to take awesome pictures like these: 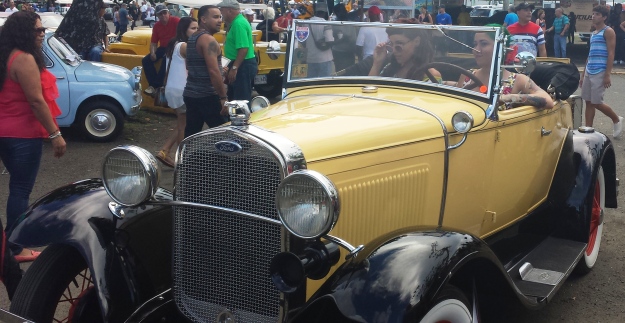 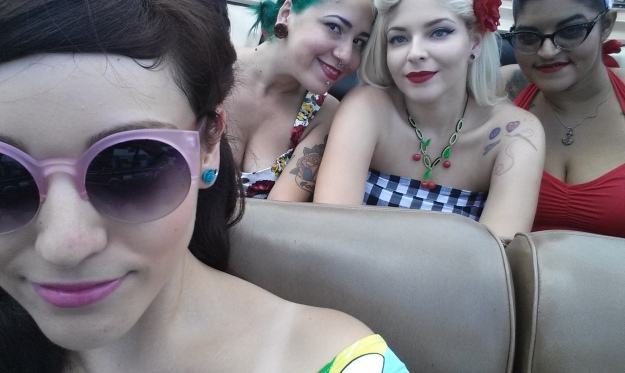 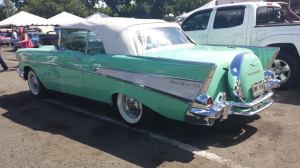 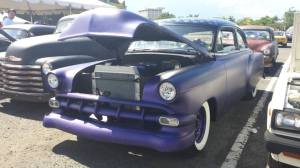 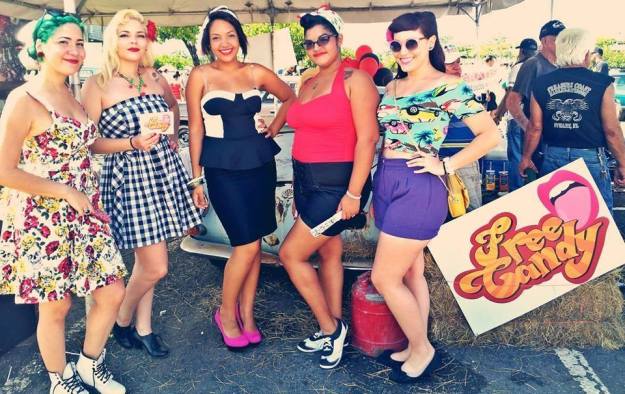 While we were there, a couple of little girls said I looked like Katy Perry.  They made my day!

I wore my favorite high waisted shorts from Forever 21.  I got them almost a year ago, so they’re not selling them anymore.  Mine are really beat up and in need of a replacement.  I didn’t want to let them go, so I did what I always do:  hunt them down in Google Images.  After looking at dozens and dozens of pictures, I finally found them.  I discovered Poshmark, a place to sell and buy clothing.  Unfortunately, it isn’t Paypal friendly.  If you’re interesting in something, try negotiating with the seller.  I was able to pay mine for the shorts through Paypal and am now a happy camper.  Just because I found a replacement, doesn’t mean I will actually replace them.  I’ll now use the beat up pair for school and save the nicer looking one for other ocassions.

I got the retro car crop top on eBay and it was the very last one in my size!  (Am I the only one that feels like celebrating when this is accomplished?)  I first learned this perfect top existed a few months ago thanks to Ashley Marie Rosas.

As for shoes, I wore simple black ballet flats which can be found almost anywhere.  Mine are from Sears and are breaking down on me.  They’ve attained a weird shape.

This past Saturday, one of my bosses asked me to dress up for work.  There was going to be a halloween party, although it did not look like it.  I’ve noticed that people in my hometown, Ponce, aren’t very fun.  They let themselves be controlled by the thought “Oh, but what will they think of me?”  Only a handful of people went dressed up.  I saw a cat, some guy with a hat (yup, just a hat), and a minion.  My co-workers simpy took their shirts off and put on a bow tie and when asked what they were, they said “strippers.”  So creative.

I, on the other hand, didn’t really have a costume ready and went throught my closet.  I found everything I needed to dress as Daria (please tell me I’m not the only one that remembers that show), but realized I would be sweating buckets while working.  So me as Daria, was a no-no.

The blazer / jacket is from Forever 21 and I got it a couple of years ago when blazers were really on trend.  I stole the  oreange tank top from my mom’s closet and the skirt is from Hot Topic.  I got it for $5 and  think that’s the only reason why I got it because it’s almost four years old and I’ve only worn it for about five minutes, the five minutes it took me to complete the look and get my phone to take this picture.

Those boots are Bongo.  My former housemate, Mariela, had a pair and she let me borrow them a couple of times.  I liked them so much I just had to get them and I did it though eBay.  I’ve been told they look like they were made for a wrestler.  They think this bothers me, when in reality it just makes the boots even more awesome.

After realizing Puerto Rico is too hot to wear a wannabe blazer jacket, I figured I should go with plan B, which didn’t exist at the time.  I looked in of my closets and found many fun things: full, red polkadotted skirts, a Pink Ladies jacket and my old Mario and Luigi caps.  The only outfit I could complete would’ve been a Super Mario homemade costume.  I thought about being dressed as Mario at the bar, but I wasn’t too fond of the idea of clients calling me Mario.

I remembered I got a couple of playsuits from Sourpuss Clothing and one of them is sailor-inspired.  During the summer, I bought a mini sailor hat thinking I would be able to get a couple of pictures taken.  I even had the location and props thought-out.  The photoshoot never happened and I never got to wear the fun playsuit… Until this weekend. 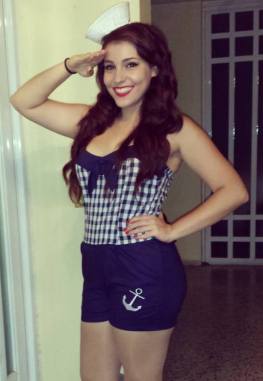 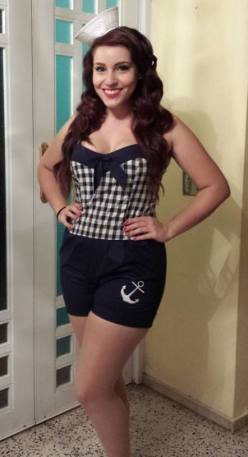 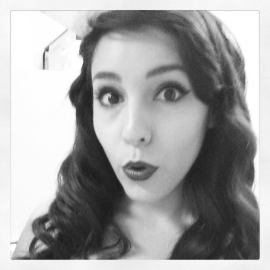 I felt so confident, I even took my first instagram video!

After getting excited because I should be able to graduate in May, the excitement vanished when I got a D in Literary Theory and another after that… In the same course.  For the first time ever, I honestly don’t know if I’ll be able to pass a class.  It’s frustrating because I feel myself trying too hard to understand whatever comes out of the professor’s mouth and reading and re-reading whatever was assigned… Only to get Ds or D+s followed by a little note saying “For effort.”  I don’t know what makes me feel worse.  A plain old D or a D+ with pity.

Two months ago, ipsy sent me a Jesse’s Girl liquid eyeliner.  I knew I would love it just by the name of the brand.  Who hasn’t heard the fun song?   I love this eyeliner because it goes on super duper smoothly and it won’t dry out so quickly like Cover Girl’s felt tip liquid eyeliner.  Keep in mind that it says it’s waterproof, but it really isn’t.  I guess Jesse’s Girl lies sometimes.

Also, The Carrie Diaries season two started!!!  You don’t know how happy I am!  I love this show so much!  The fashion, the music, the location… I just wish I could somehow be transported through my laptop to such a fun environment.  If you’re a fan of the show, keep an eye out for Carrie’s clothes.  If you’re interesting in something, be sure to check out Worn on TV.  I constantly find myself searching for Carrie’s and Jessica Day’s outfits there.

I think that’s all for now!  Sorry for the long wait, but midterms, two jobs and 18 credits aren’t easy!

Have a Happy Halloween!

I’ve been going crazy over the Urban Decay Revolution Lipsticks since Ipsy sent me a sample in the shade 69 (A cherry red.)  They go on smoothly and don’t flake on me.  Unlike most lipsticks, these ones won’t make my lips look dry after a few hours.  I’ve tried the colors Anarchy, Venom, F-Bomb and Obssesed.  (Note to self: Ask for an awesome camera for Christmas.  Readers should be able to see how these things look on me.) 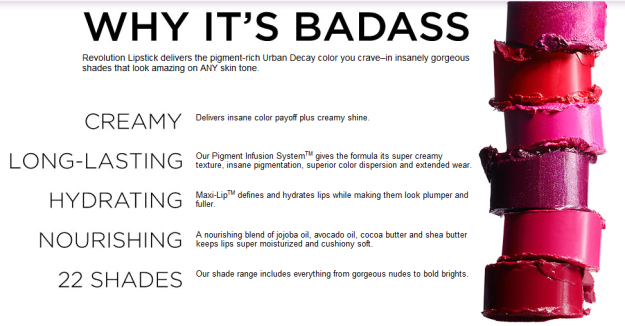 Anyhoo… I purchased a Venom lipstick and lipliner by mistake.  (Whaaaat?) Yes, please believe me!  I swear I’m telling the truth.

I’m a hardcore Kandee Johnson follower and not so long ago, she uploaded a video to YouTube: A tour of Urban Decay.  At the end of the video, she announces a special price for the lipstick and liner duo for her viewers and ipsy subscribers: just $35.  The limited time offer was only available in two colors: Venom and Jilted.  I guess curiosity killed the cat because I just really wanted to see a swatch of the Venom one.  I clicked on the link and since my Ipsy account was already logged in, I automatically purchased the duo.  I had a few hours to cancel the purchase after receiving the order confirmation.  But I got it while I was in a three hour class and when I finally read the e-mail, it was already too late.  I tried begging ipsy to cancel the order, but that didn’t work. 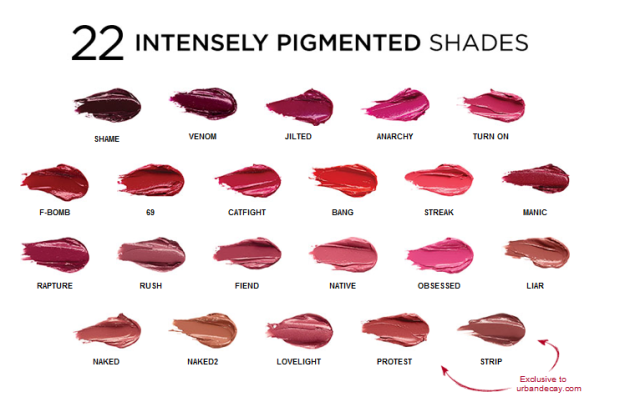 I thought long and hard about keeping them, but I already have similar colors, even though they are not Urban Decay.

I’m giving the duo away!  Who will be the lucky reader?

There are two ways to enter:

Yes, I know Rafflecopter exists, but my Website is hosted by WordPress.com for free and I can’t use Javascript.  Sorry! 😦

Winner will be announced on Halloween.  Good luck! 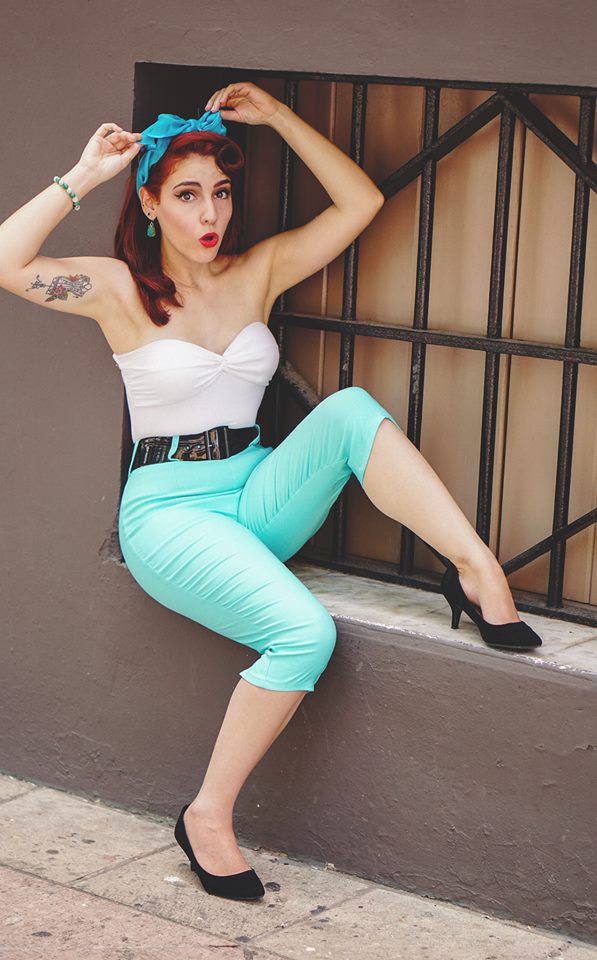 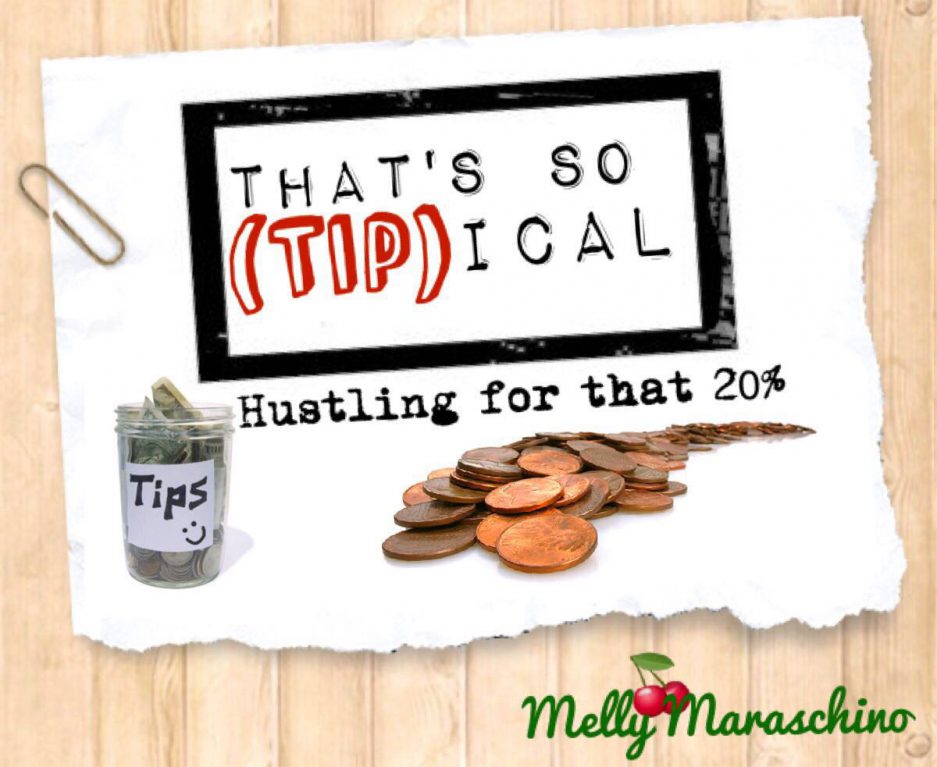